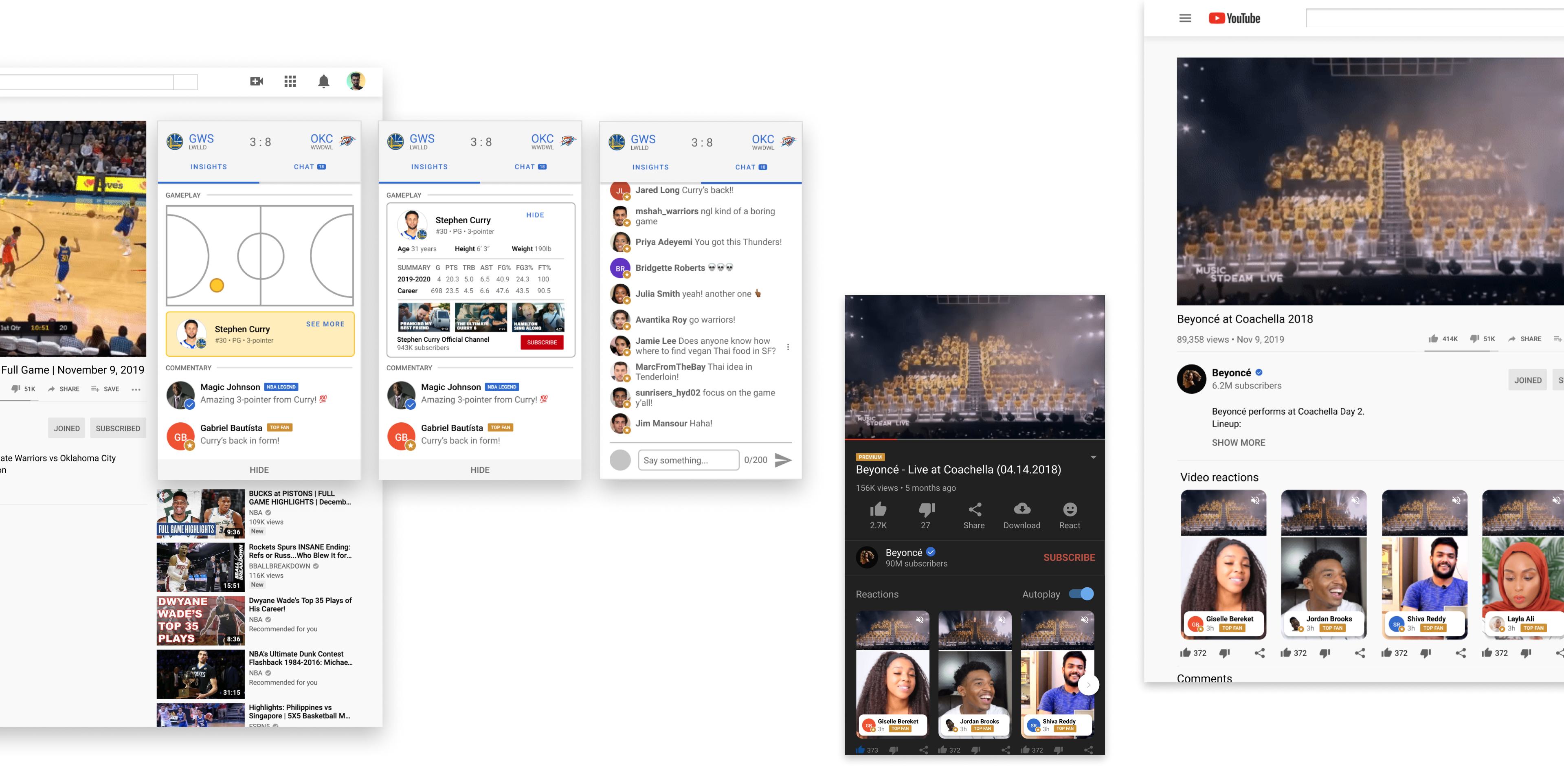 As my first project at Berkeley Innovation, a student-led design consultancy at UC Berkeley, I had the exciting opportunity to work with YouTube alongside Katherine Ong, Mattin Delavar, and Jake Cha under project mentor Justin Wong.

Currently, YouTube implements channel membership for creators, which incentivizes fans of certain creators, such as Binging with Babish, to become paying members in exchange for perks such as exclusive videos, stickers, and more benefits. As part of our project, we followed Berkeley Innovation's four-sprint method to look at envisioning paid channel memberships for fans of larger franchises, such as brands, musicians, and athletes, leading to the follow how might we:

We set out to understand what superfans—like those who might choose to pay for channel memberships—might want out of a premium fan experience. As part of our research, we chose to analyze what other successful platforms in this space have done through several competitive analyses, send out surveys to see how sports, music, and brand fans engage with content, and conduct generative interviews with survey respondents to take an in-depth look at how users display what we called "fan behavior". 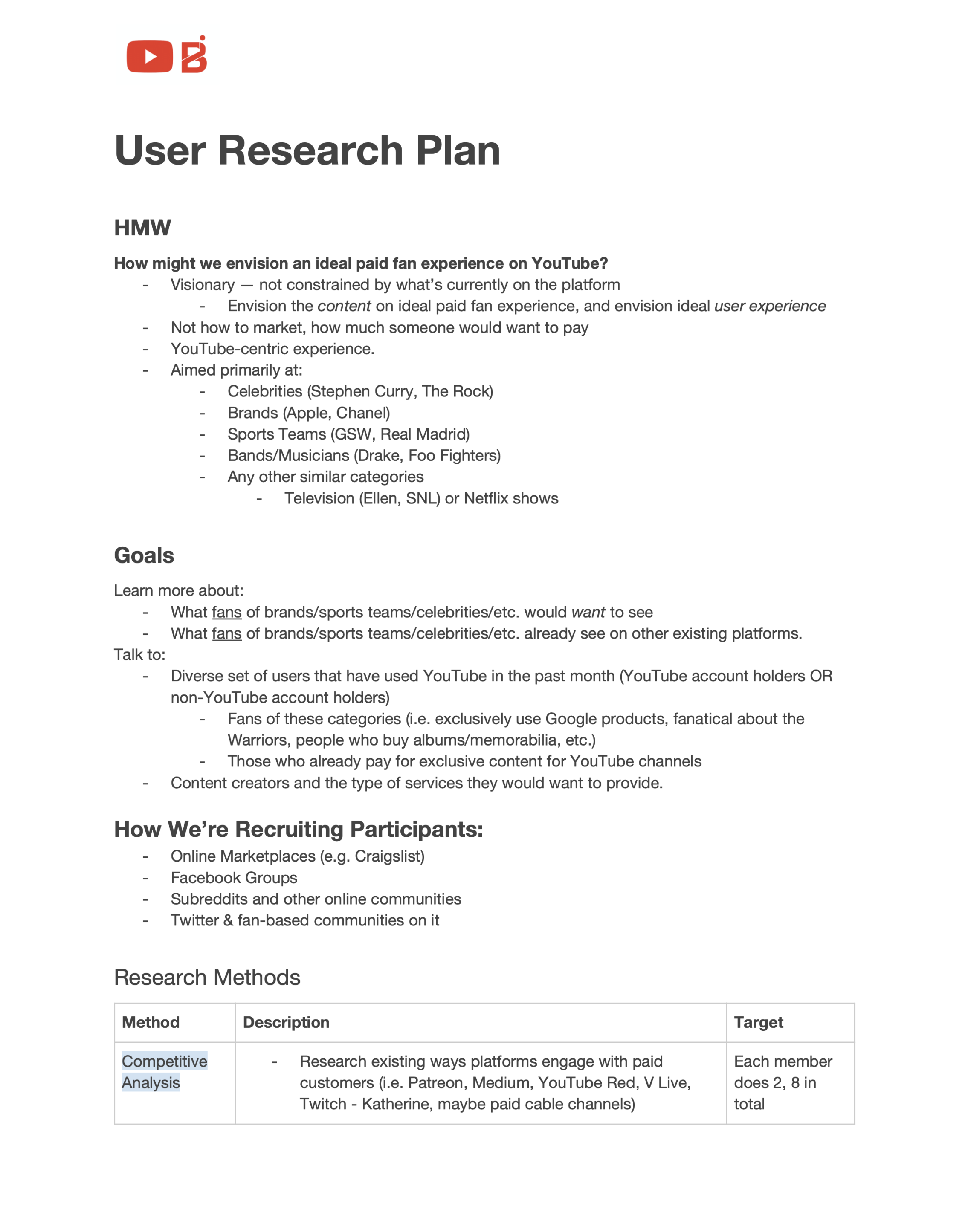 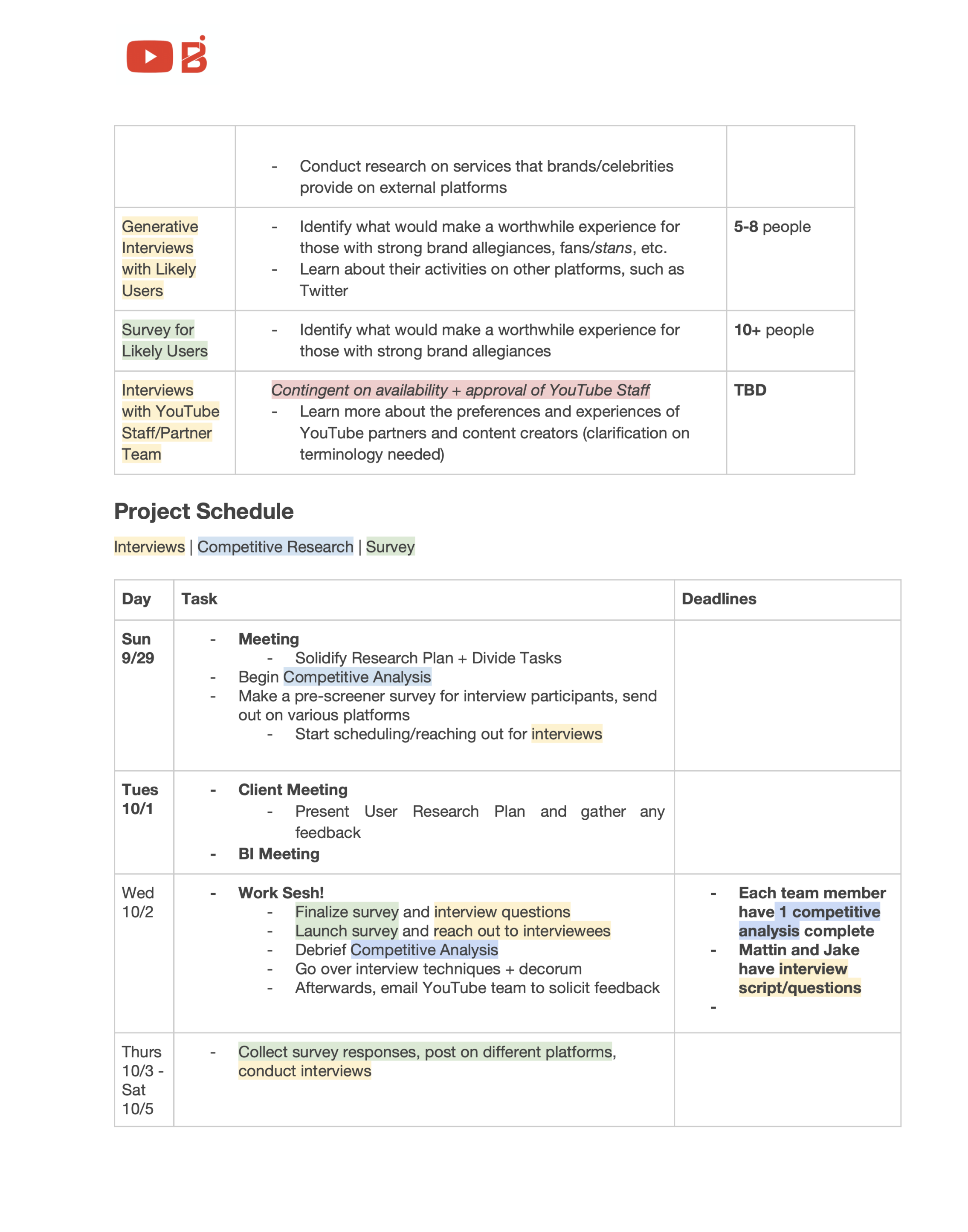 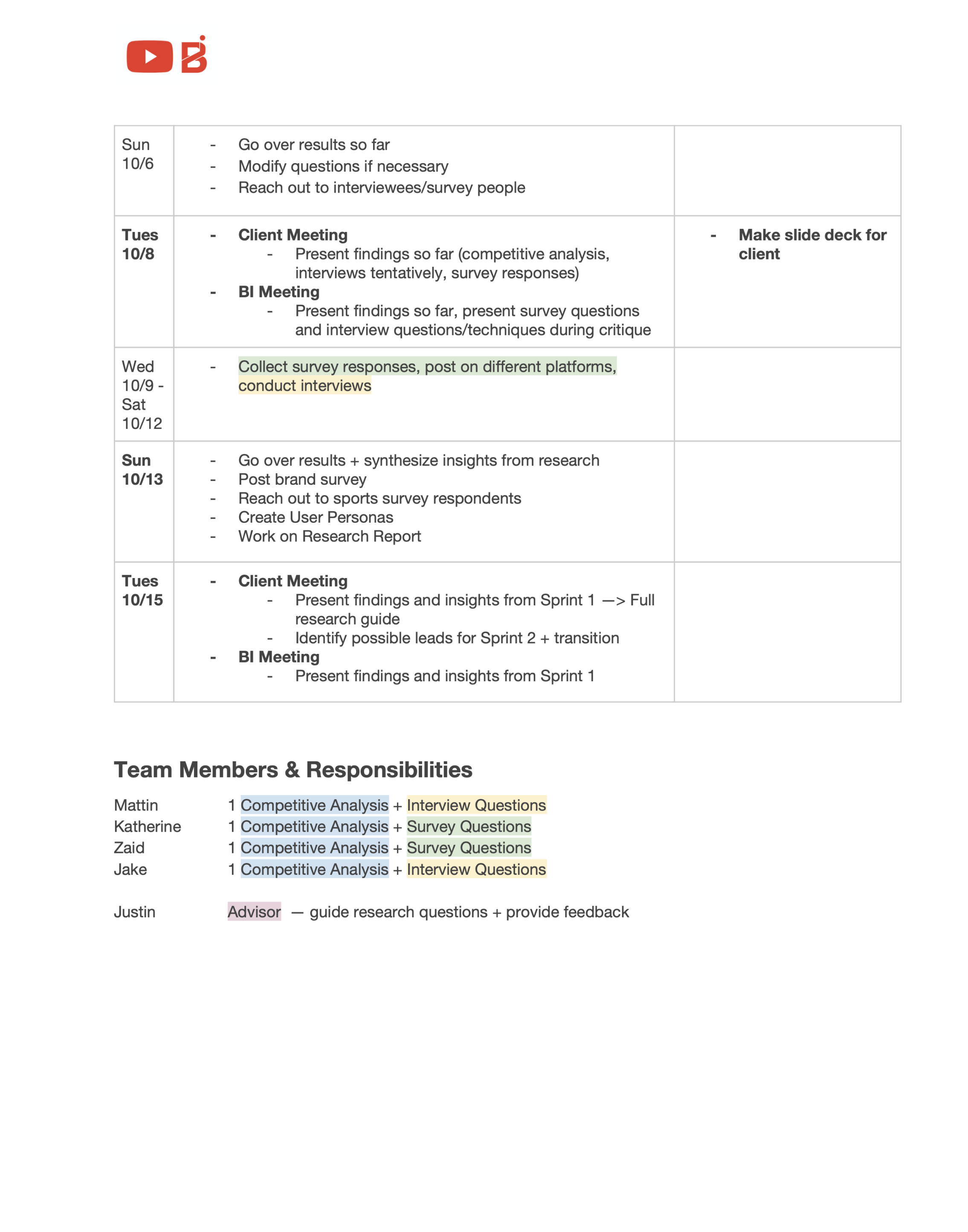 Each consultant comprehensively analyzed two competing platforms, collecting our thoughts into a 22-page long document. The insights that stood out the most were: 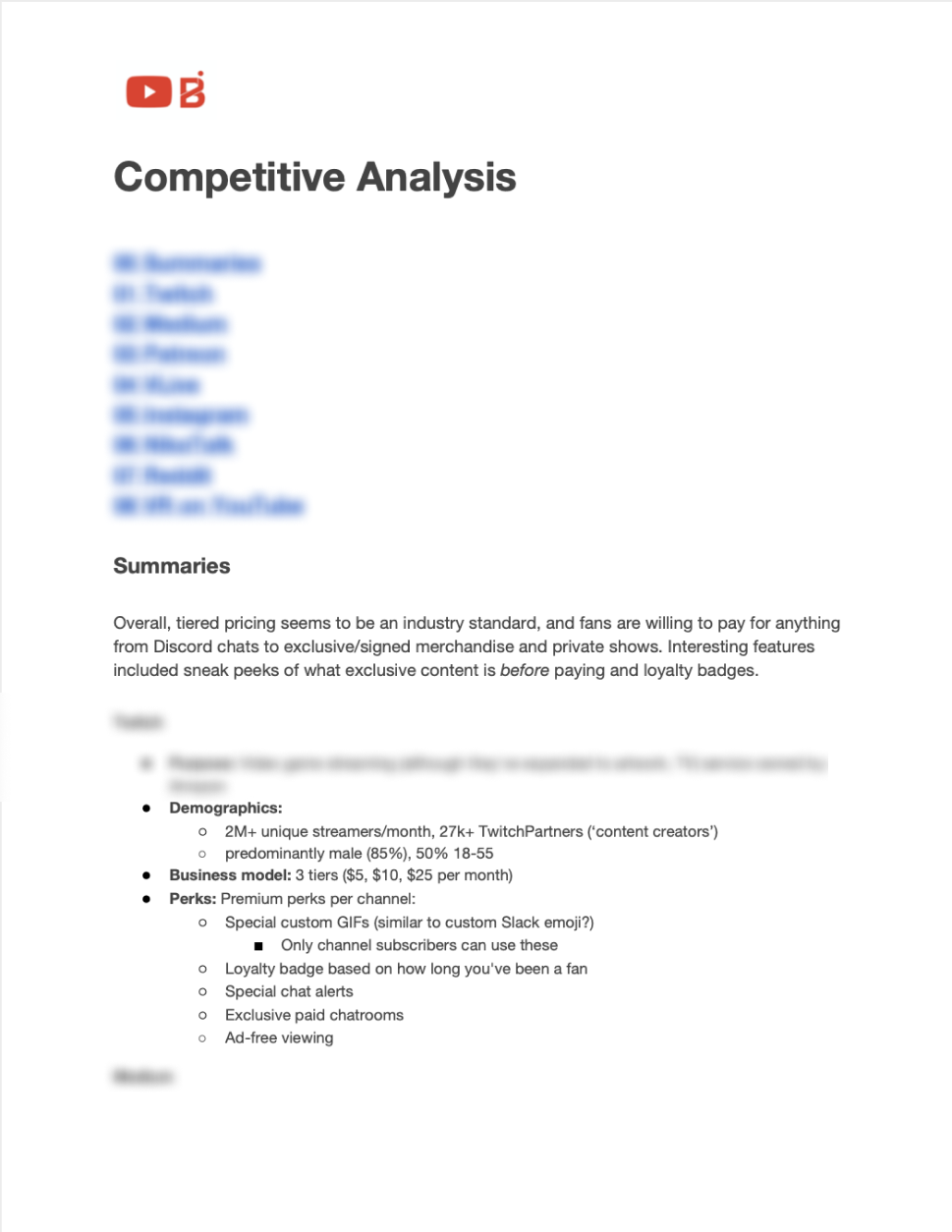 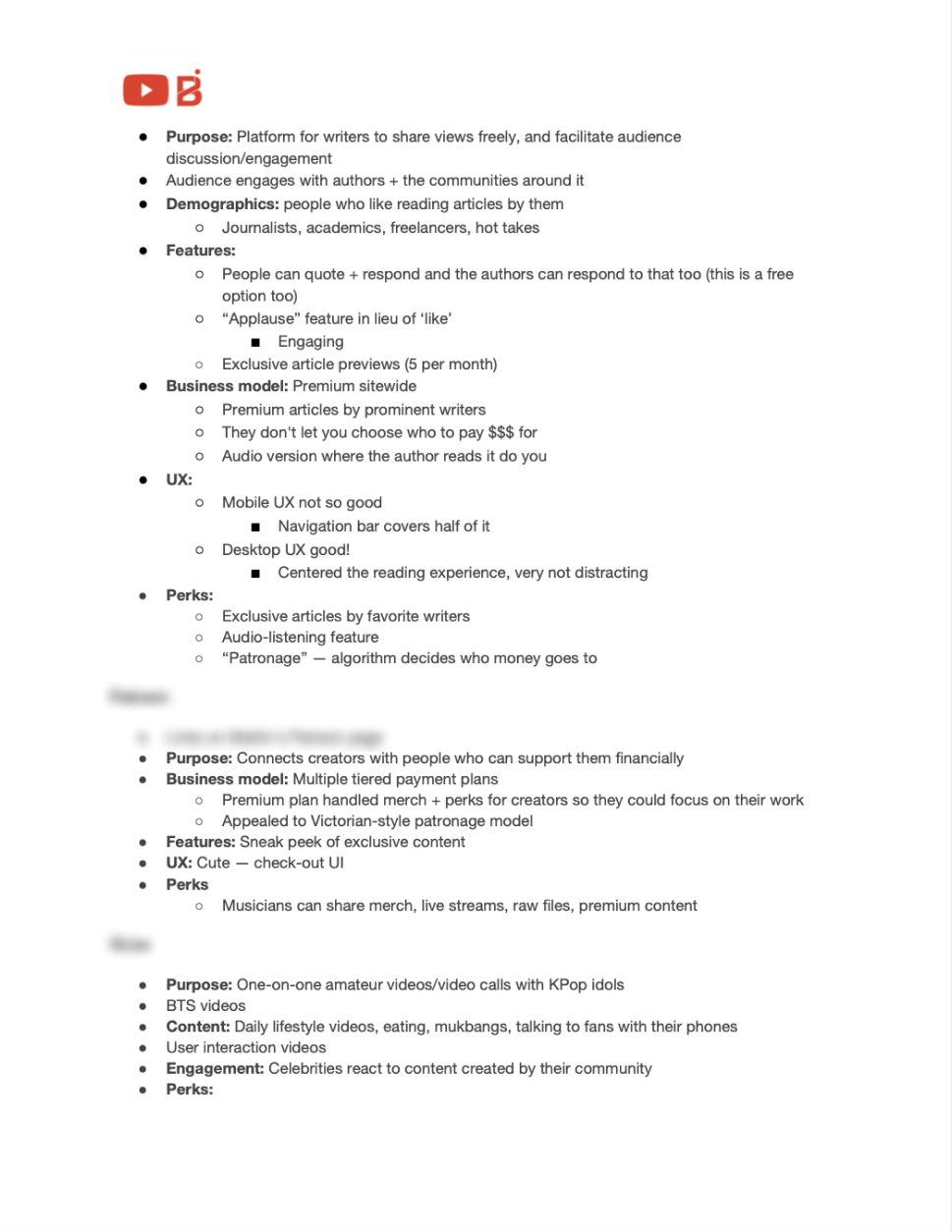 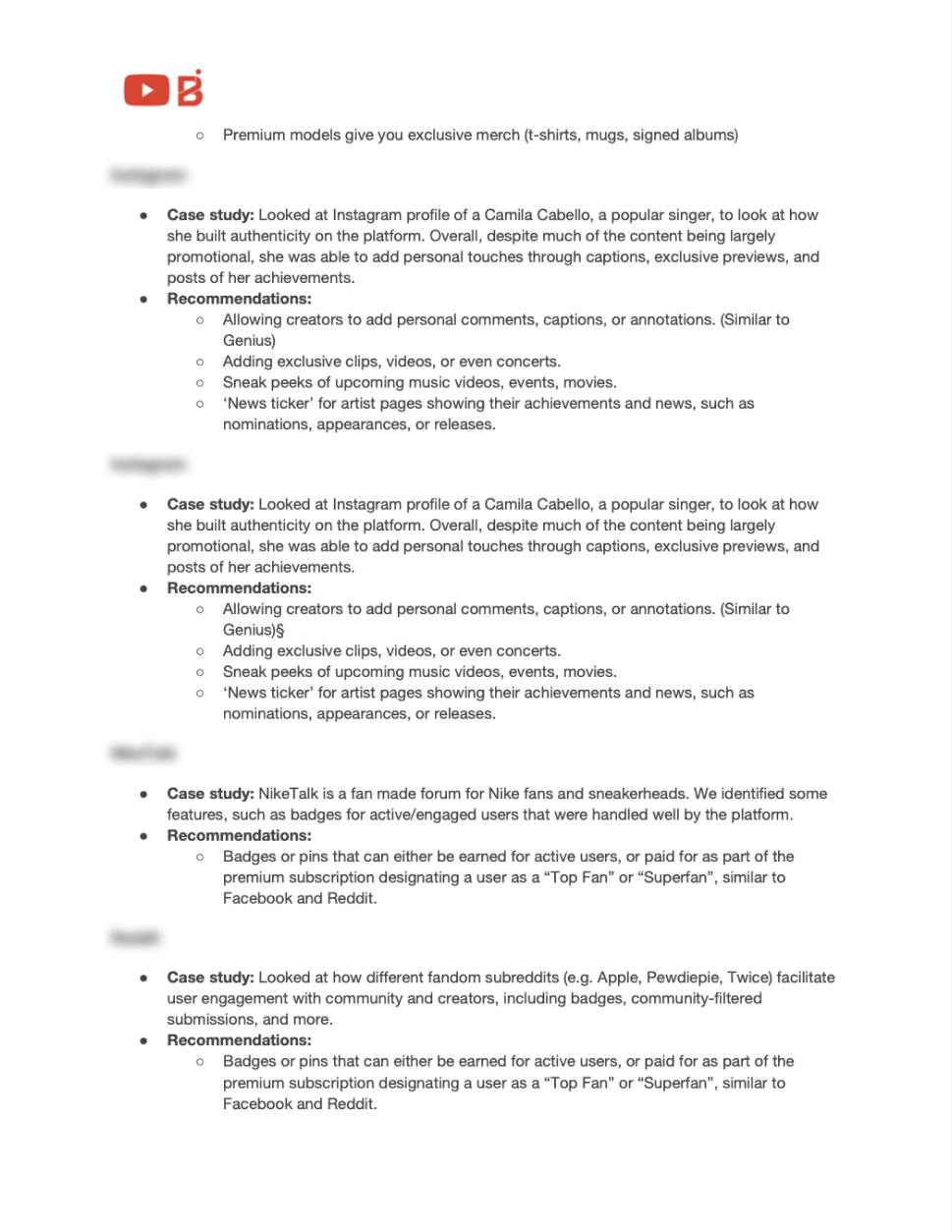 I then worked with Katherine on formulating questions and creating survey logic, and with her expertise we were able to craft questions which would elicit the right responses from survey takers. We sent out surveys on Facebook groups and subreddits where we felt we would find the most passionate fans, and received 202 responses across the board. From this impressive base of respondents, we were able to conduct generative interviews. 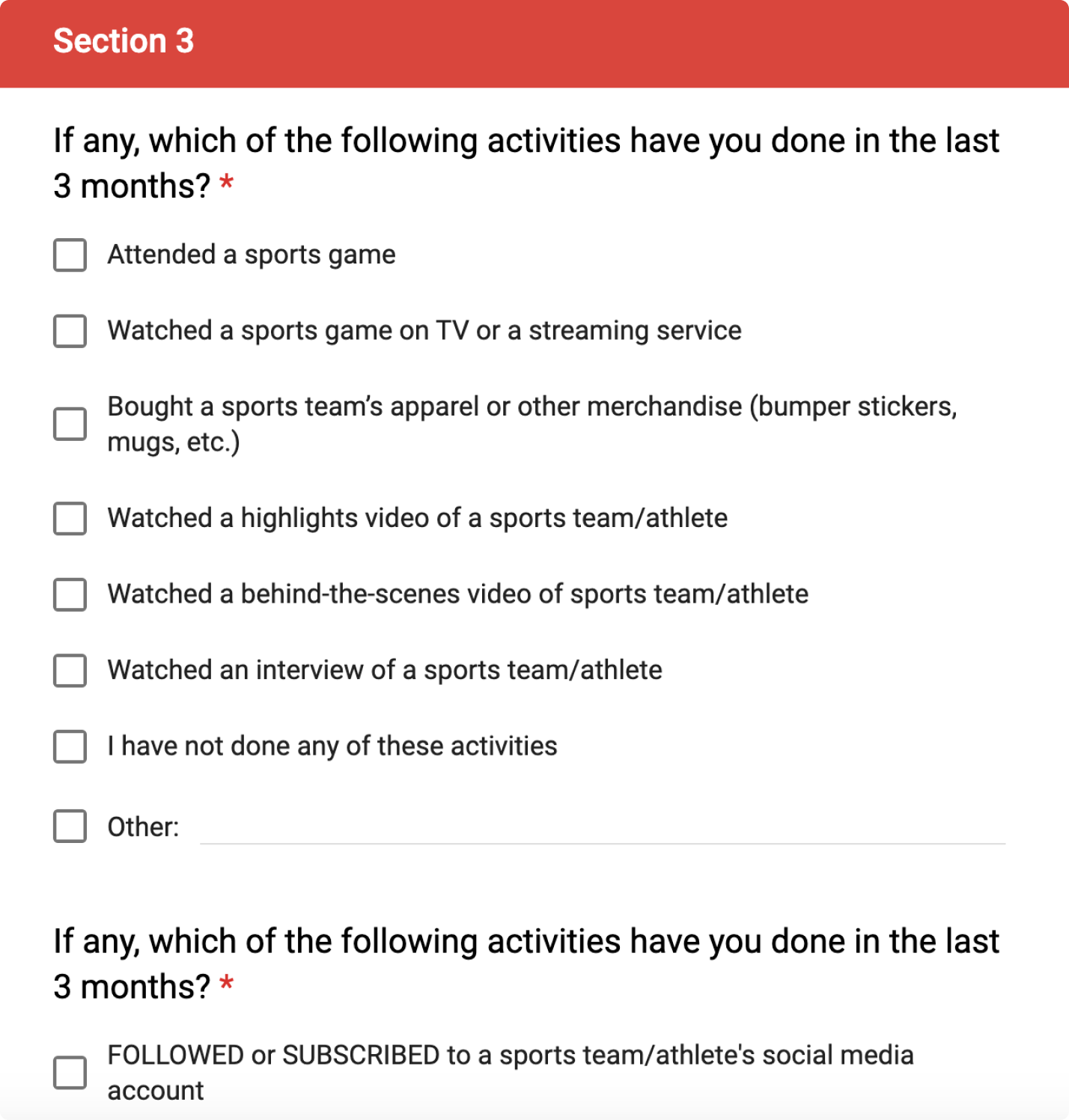 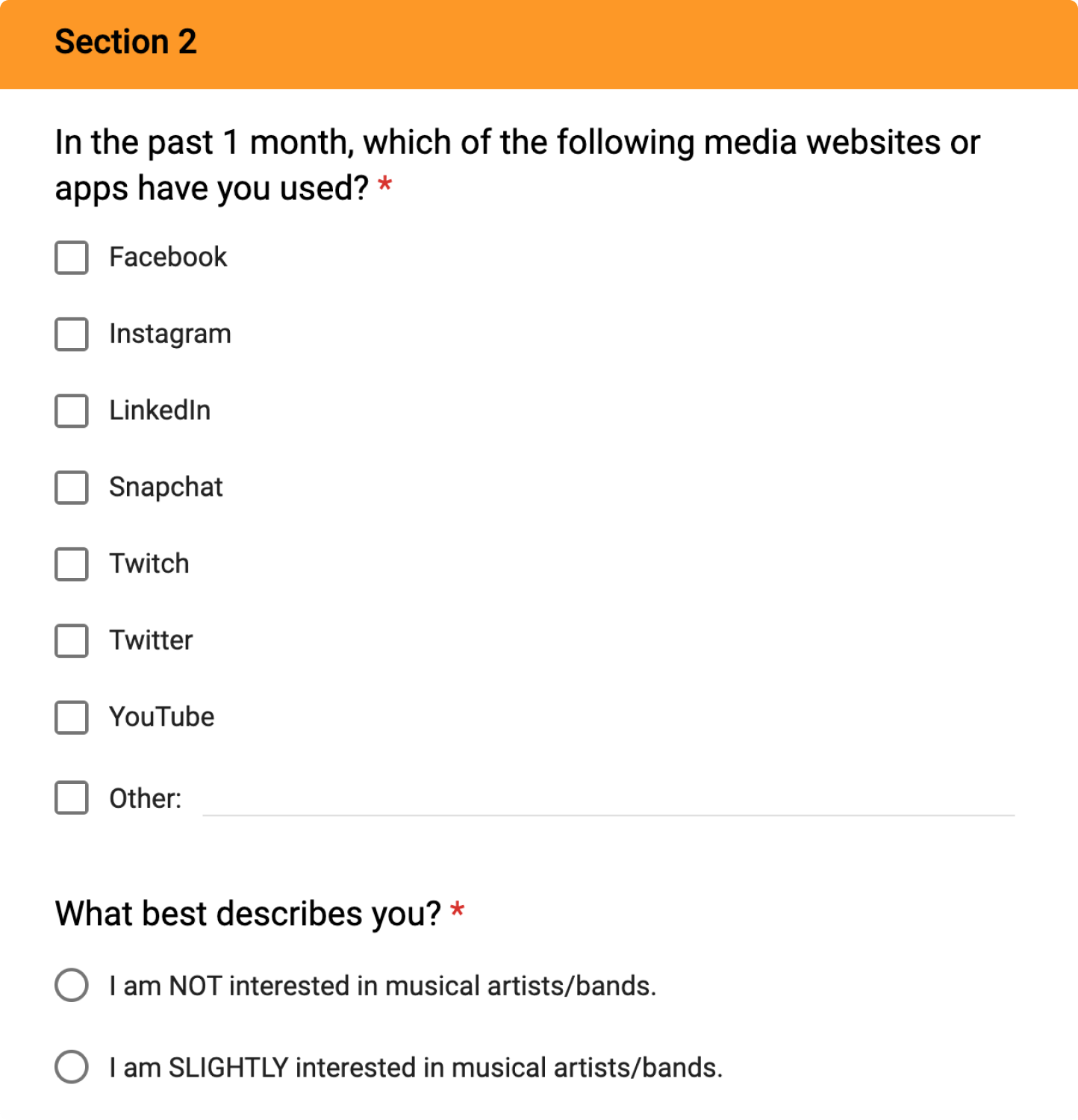 We then talked to 7 'superfans'—passionate fans who agreed to sit down with us—for generative interviews. After presenting our findings at our weekly client meeting, we also chose to conduct guerrilla interviews (or "field interviews") outside a Warriors game at AT&T Park in San Francisco and at a Yasiin Bey and Erykah Badu concert at the Greek Theatre in Berkeley, which added 15 more perspectives to our roster. In the end, we found that: 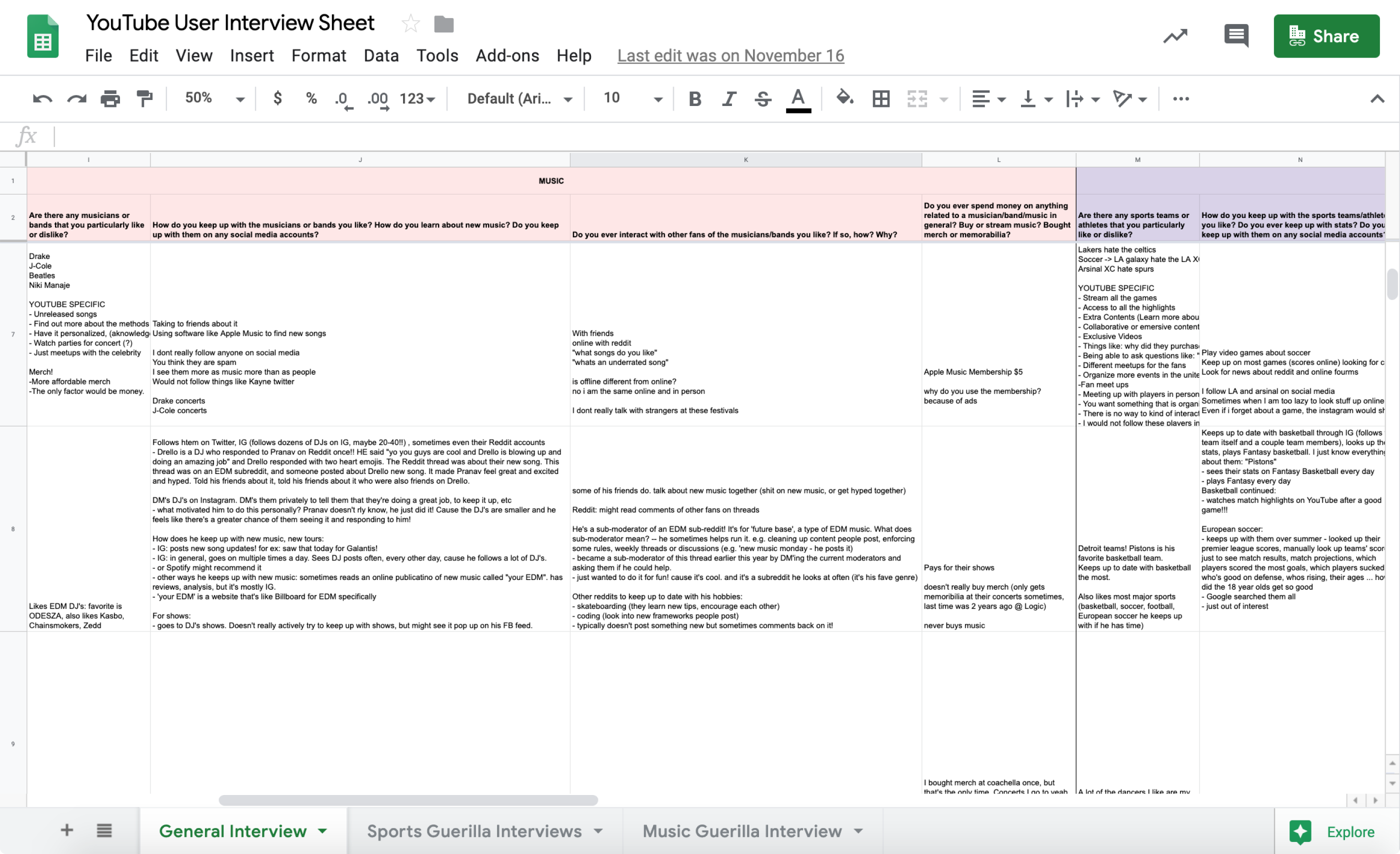 Shoutout to Mattin for leading this sprint!

Having conducted research, in order to organize our insights, we used the affinity mapping method to group related insights across our research and understand common themes. We started off collecting our thoughts using a whiteboard and Post-It Notes, before moving on to using Figma to digitize our findings for better discovery later. 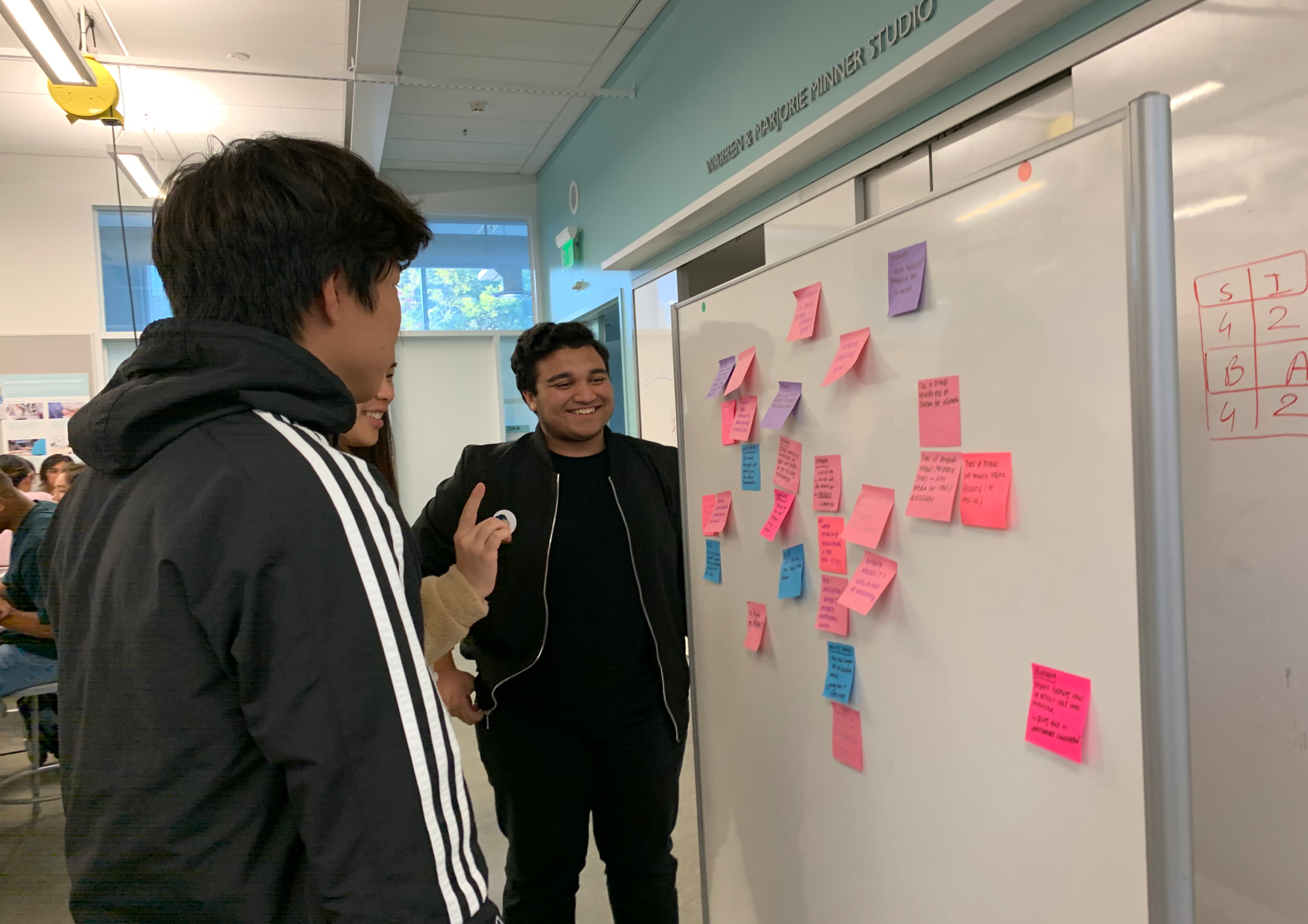 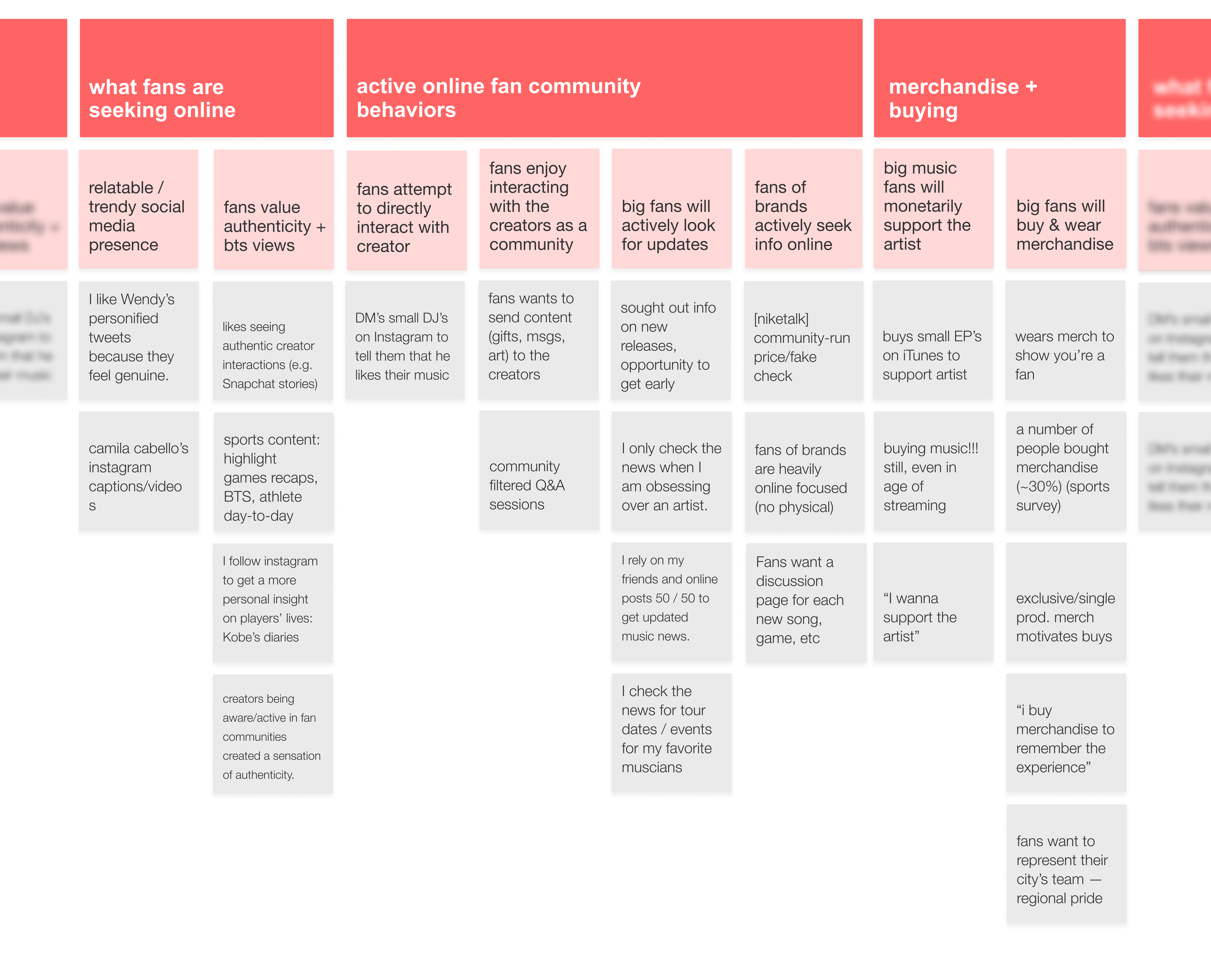 Having organized our thoughts on an affinity map, we were able to extract six main insights across all our research.

To reflect the diversity of fans who may use YouTube, we created personas for each type of fan we encountered during our user research, including different use cases and interests.

Shoutout to Jake for leading this sprint!

I had the exciting opportunity to lead the prototyping sprint. Keeping our insights and user personas in mind, we began sketching out a few low-fidelity prototypes of potential features and benefits fans may enjoy. 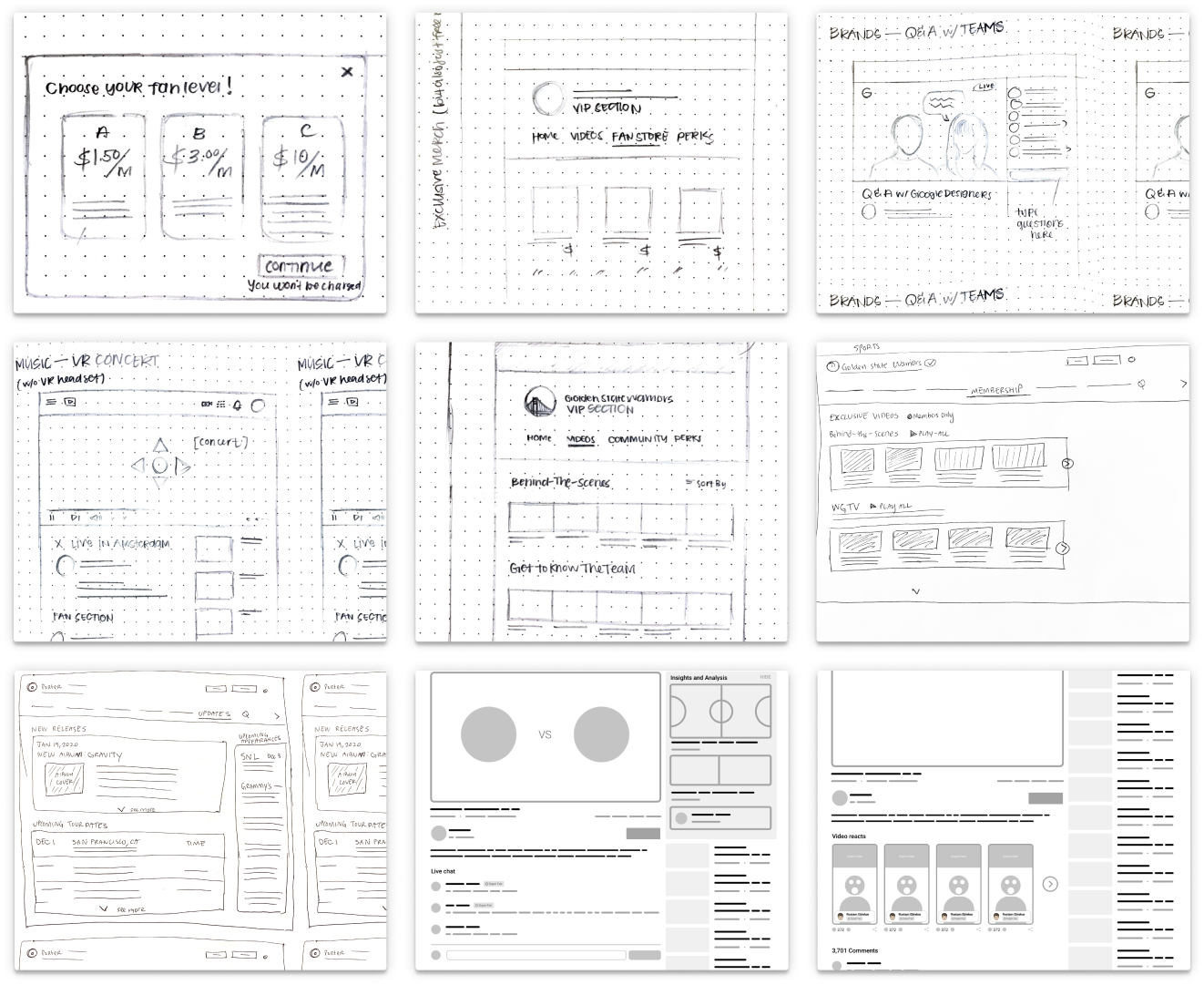 After brainstorming some sketches, we then narrowed down six features to further develop refined, digital mid-fidelity prototypes using Figma. 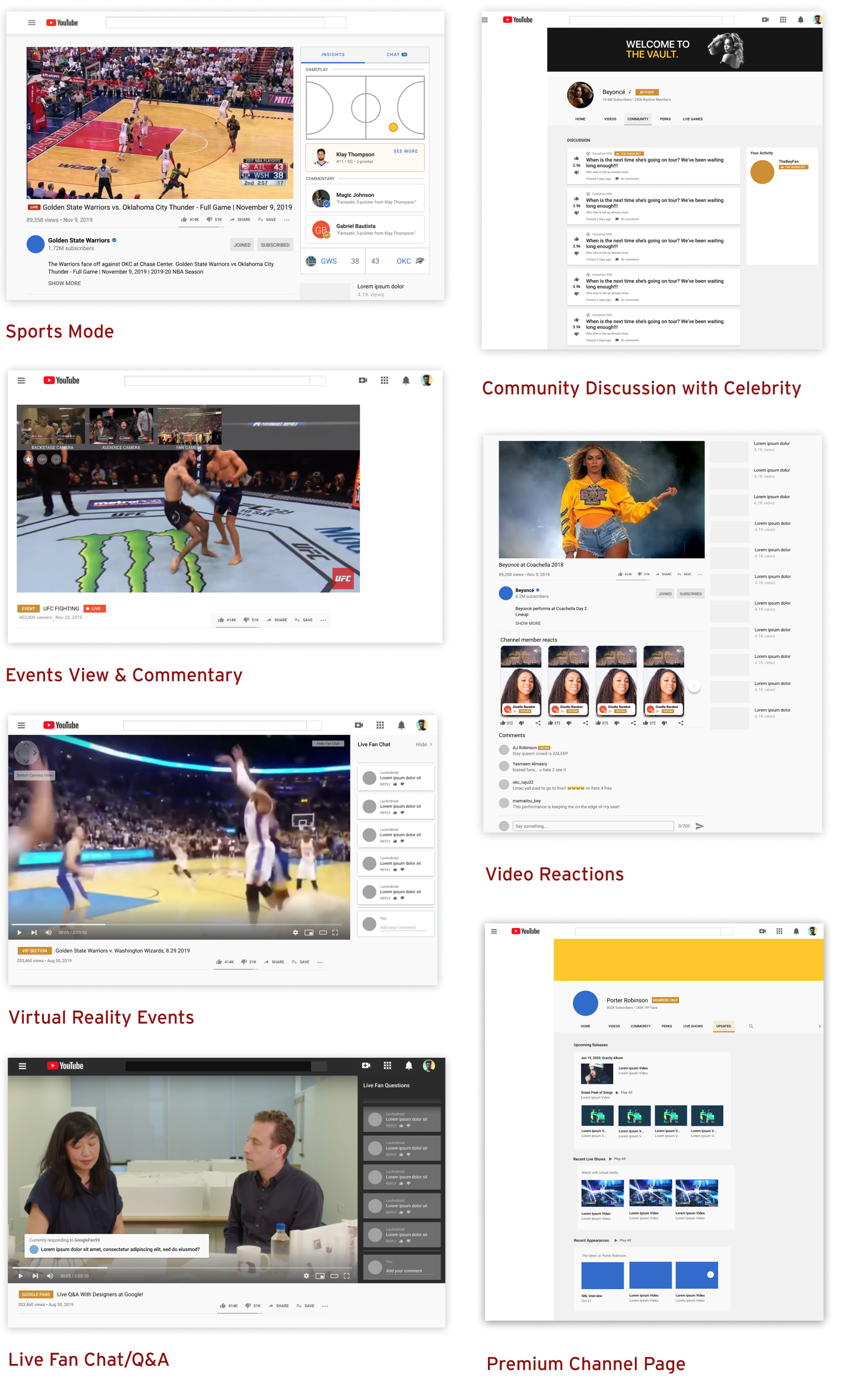 After creating our mid-fidelity prototypes, we felt it was time to conduct some concept testing on our features on users and see how they would respond to the features we ideated. We reached out to four students to test our prototypes on, and recorded their feedback. 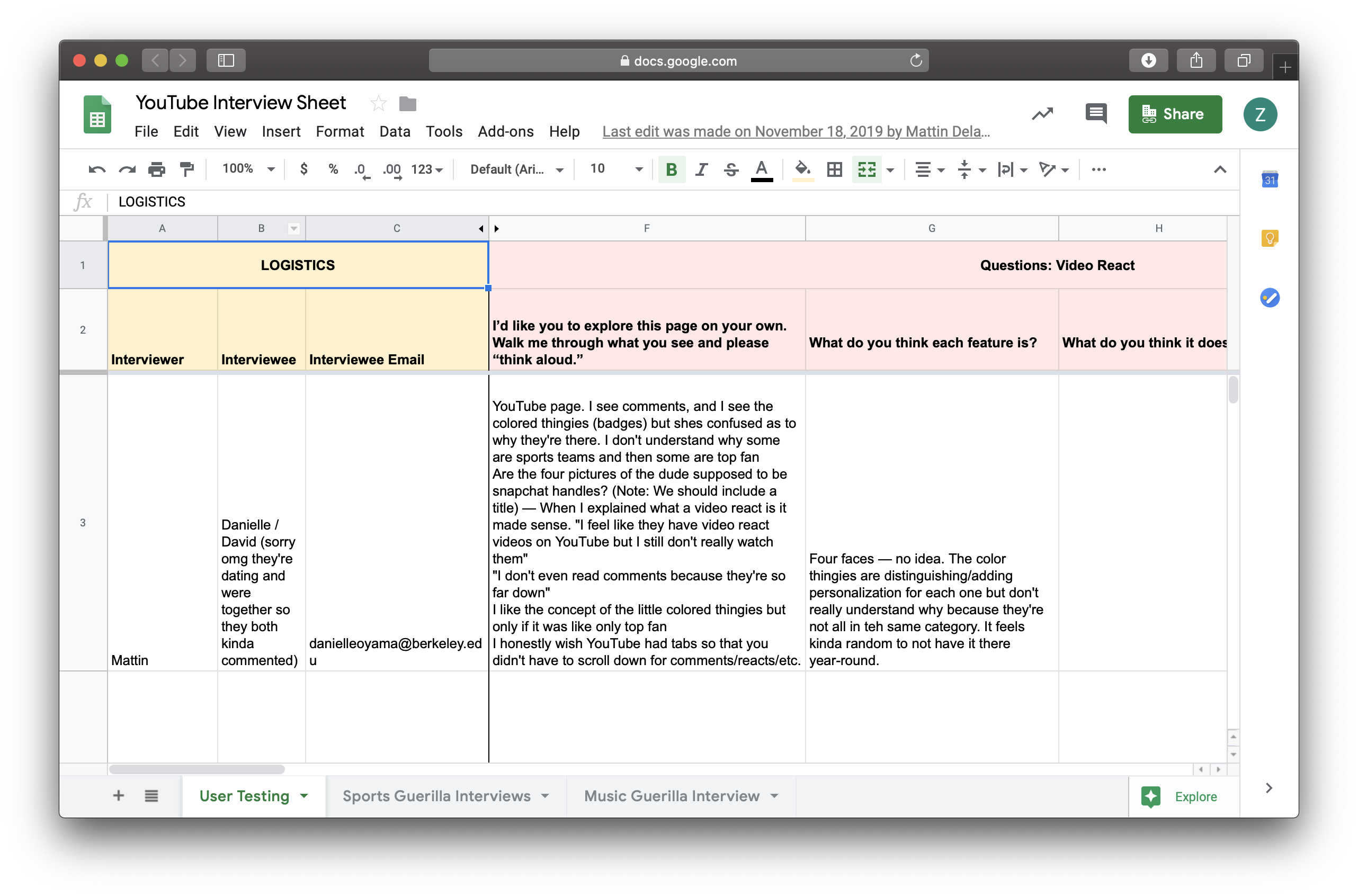 We also presented our prototypes for critique at a Berkeley Innovation meeting, which allowed us to get additional helpful feedback on our designs. Based on the aggregated feedback from concept testing and critique, we defined problem areas and action items for improvement.

For the most part, participants understood the prototypes’ functionalities but there were some confusing areas

Though participants mostly understood the prototypes’ functionalities, not everything resonated with them

→ decide what features to keep or kill. What would be best for paid fans?

Participants mostly understood what “live chats” on live videos were, but there should be more differentiation between live chats and comments

→ decide what each feature should look like, and decide where each one should “live”

Thank you to Katherine for leading this sprint!

Having identified areas for improvement, we set out to revamp our six features as we moved into doing high-fidelity prototyping. Here are the final prototypes of the two features I worked on, Video Reacts and Sports Mode.

Below are the final deliverables from the whole team. 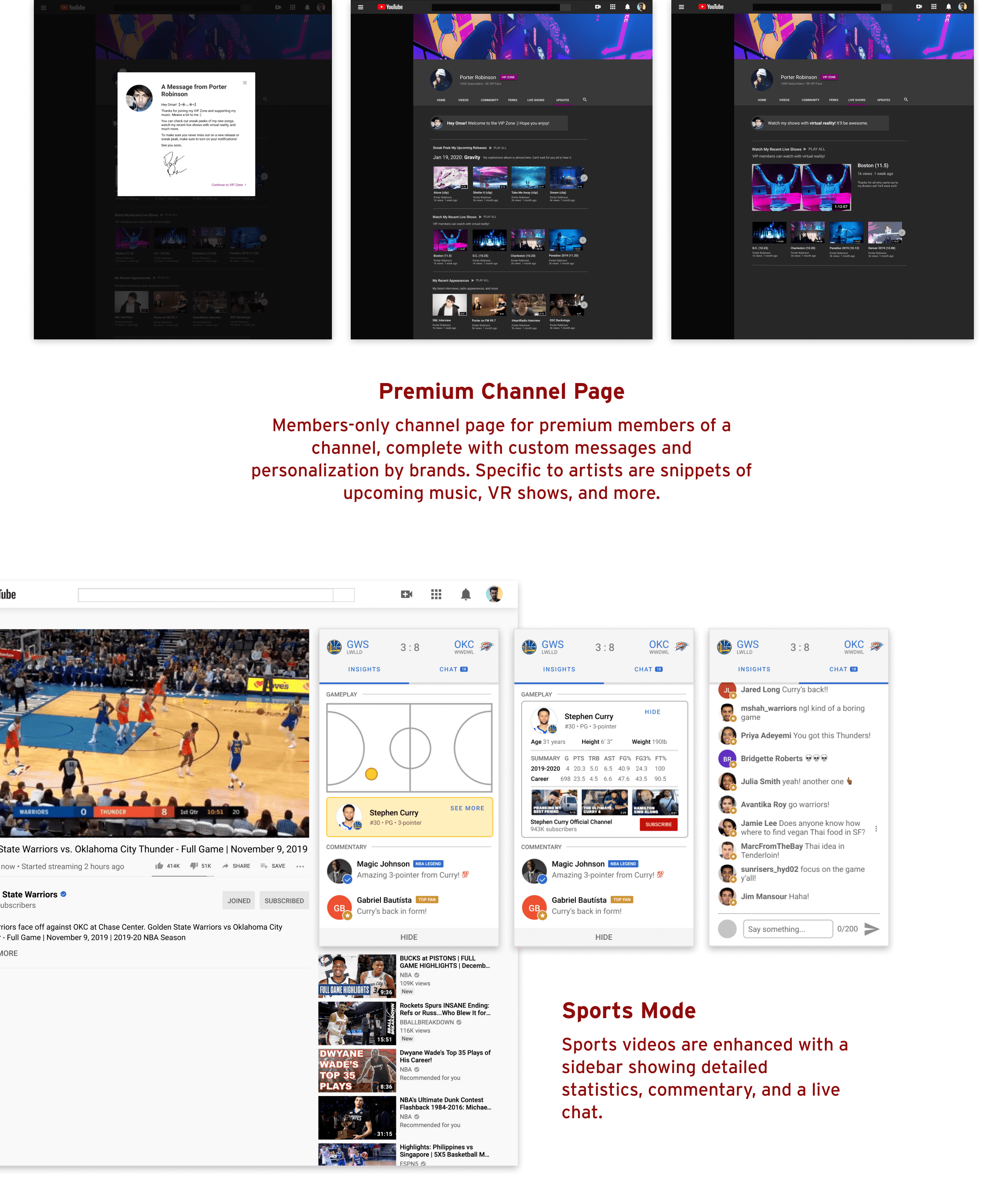 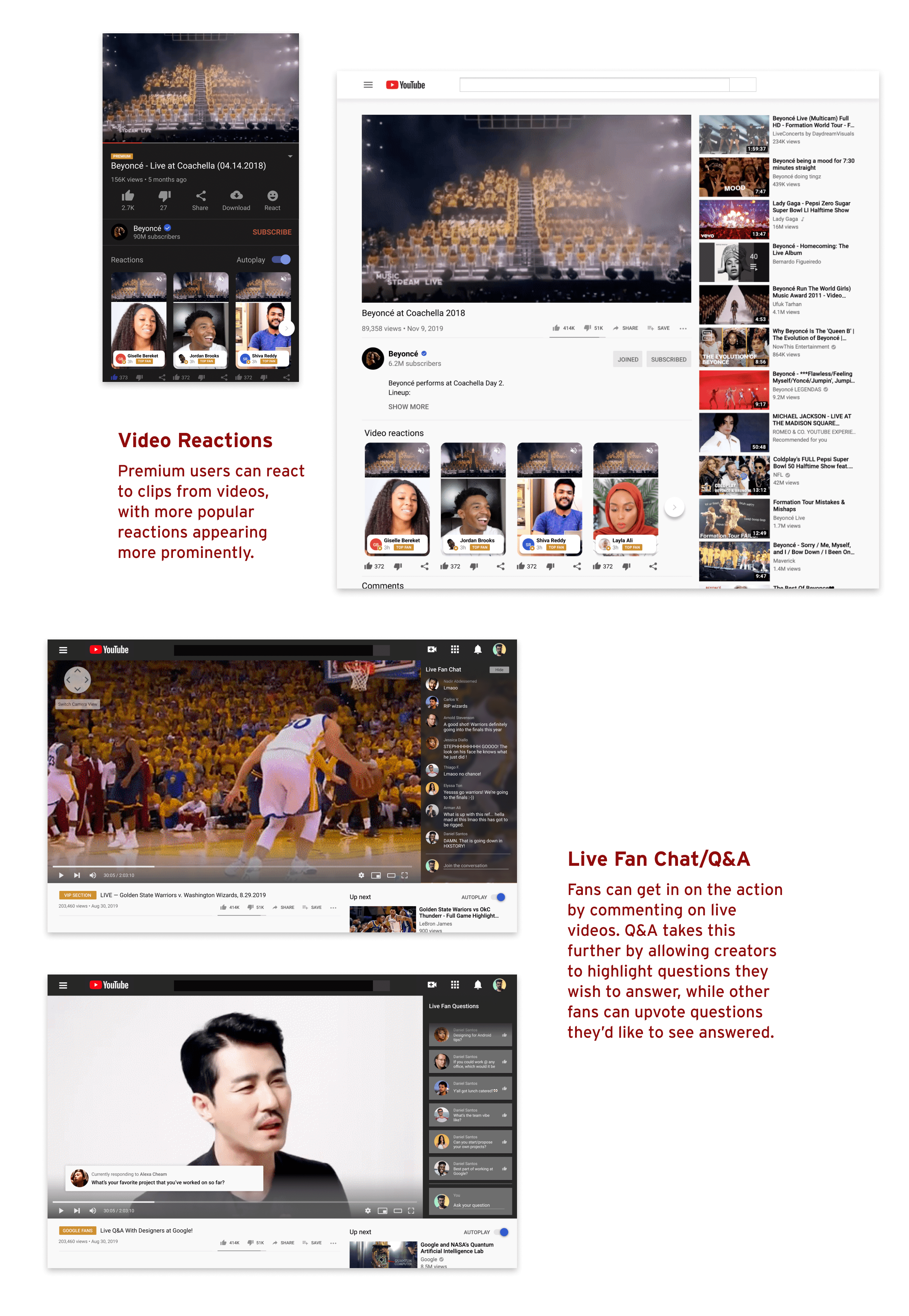 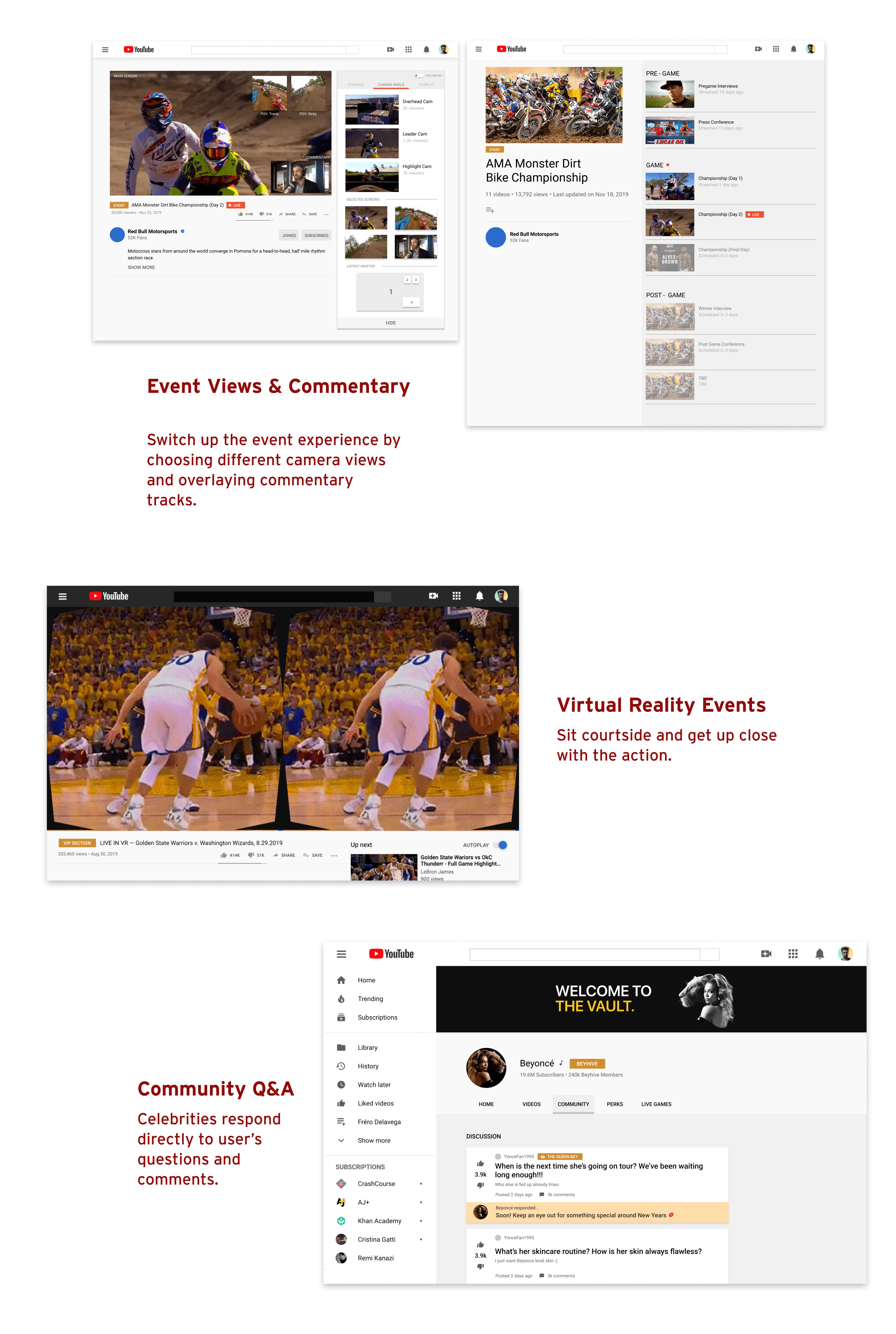 I truly enjoyed working on this project for developing my existing skills while introducing me to the rigor of new ones I hadn't yet encountered. Huge thanks are owed to my team and project mentor, as well as the fantastic folks at YouTube—Melissa, Adam, Christian, and Constantine—for their support and mentorship.

Despite the challenge and rigor of the project, I am thankful for this opportunity for giving me the chance to grow as a designer, consultant, and team member. 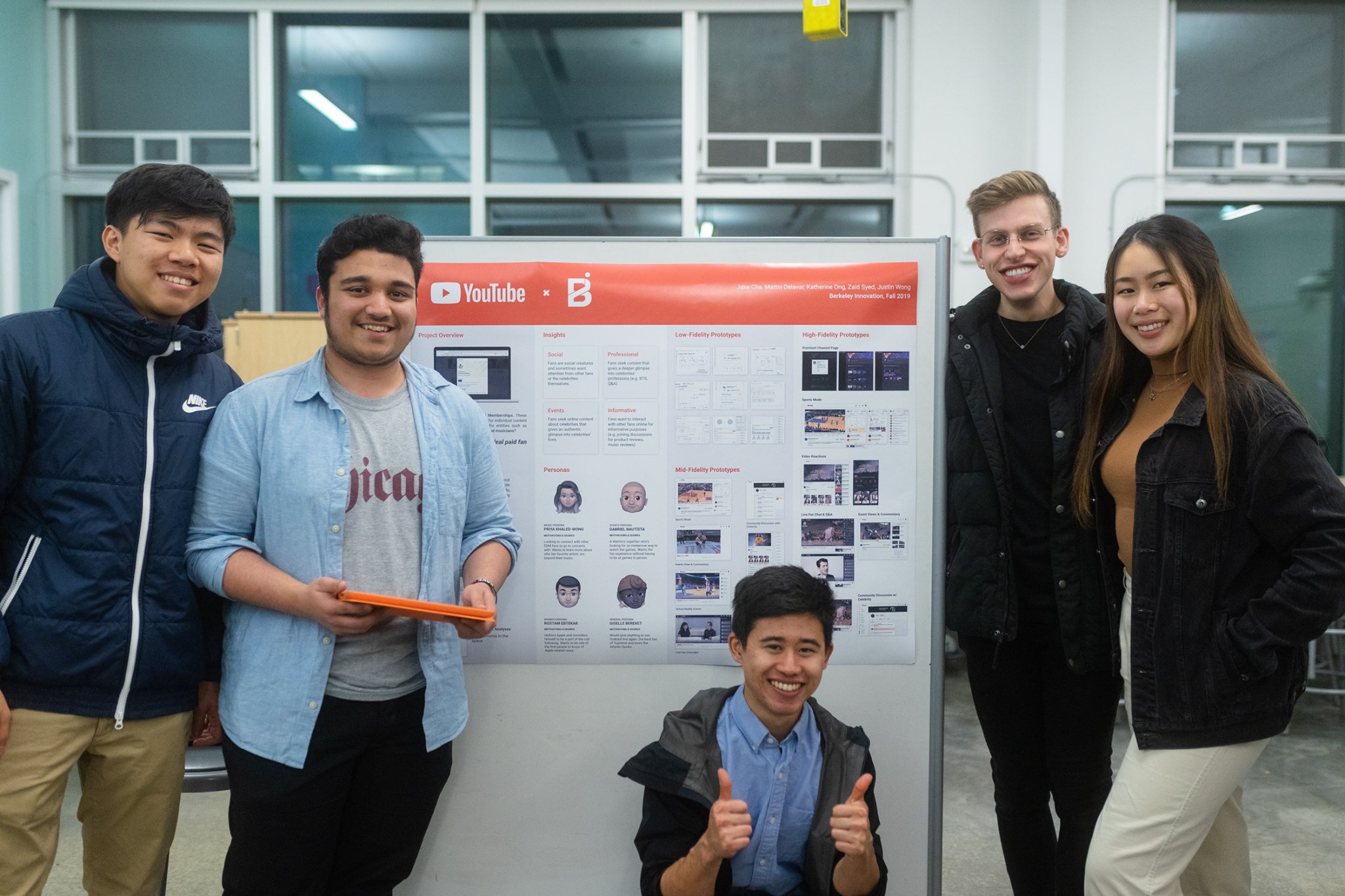